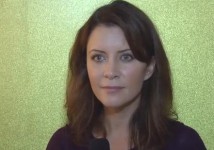 LOS ANGELES — Producing sci-fi programming for the Web brings a host of challenges given smaller online budgets, but the key to make Web shows work often lies in setting the story "five minutes in the future," advised Web creator Taryn O'Neill during a recent interview with Beet.TV.

That philosophy helps her to focus on the characters and the story that resonate even with a much smaller budget online. She urges other creators to listen to and focus on what's happening in society, be it in science, religion or foreign affairs, because that can ground a Web program by helping it to reflect society at large. She is also a fan of digital chapters that leave a viewer wanting more.

O'Neill is a producer, writer and actor and has starred in the Web series After Judgement. She was also a panelist at the Beet.TV Leadership Webcast presented by AOL Video and produced at the AOL Studios in Beverly Hills earlier this month.

You can watch the full 90-minute Webcast right here.

By Daisy Whitney on September 30, 2011 @daisywhitney