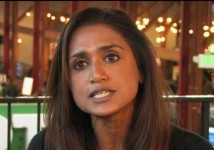 SAN FRANCISCO — Austin-based Latakoo has a product which allows video producers to compress big files to under 5 percent of their size and then send via the Web.

The company has 200 customers, many in the news business, according to this report in TechCrunch.   We caught up with Jade Kurian, president, at the TechCrunch Disrupt conference earlier this week.

Another company that has developed technology to quickly move large files for video publishers, including The New York Times, is San Francisco-based Aspera.  Here's our story from earlier this year.