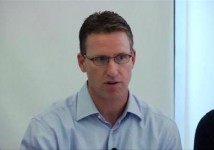 ESPN is slated to roll out ads in October in live programming it carries on digital platforms such as tablets, mobile phones and computers, said Tim Connolly, VP for digital distribution at Disney/ESPN, while speaking at a Beet.TV Online Video Leadership webcast in New York last month.

He added that ESPN will be able to charge a higher CPM for those platforms because they are effectively addressable ad environments. ESPN has been an active participant in delivering authenticated content to multichannel subscribers of Time Warner, Verizon and others, and now will sell ads that run in the digital venues that customers of those services can watch once they've been authenticated, Connolly explained.

Connolly's remarks are one of the highlights of the August 23  Beet.TV Online Video Leadership webcast.  The entire session can be found here.

Today, ESPN announced a new deal with the NFL.

By Daisy Whitney on September 8, 2011 @daisywhitney