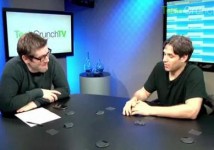 Erick Schonfeld, co-editor of TechCrunch has been named editor by AOL, taking over the reins from founder Michael Arrington.

Earlier this year, we spoke with Erick about the evolution of TechCrunch TV and the expansion of programming from the AOL Studio in New York.  We have republished that interview today.

Congrats to Erick on his new gig.