Kara Swisher on Beet.TV and the “Next Era of Journalism” 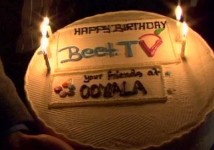 "I really like to see a lot of small media companies like Andy's just take the diversity that is really encouraging and move it into the next era of journalism," Kara Swisher, co-executive editor of All Things Digital, tells Alison Kitchens of the American Journalism Review in a feature story on Beet.TV.

Also in the story, Daniel Heaf, the BBC's Worldwide Digital Director, calls the reporting formula "incredibly useful snapshots in time of where the industry is going."

Megan McCarthy, editor of Mediagazer, the influential aggregator of media stories, tells Kitchens: "I think what he's collected is this really smart kind of look at the media industry of people who are really affecting what's going on, even though you might not really be aware of them yet."

Many thanks to Kara, Dan and Megan for their kind words.  And thanks to the many friends and fans of Beet.TV; it's been a great five years — and many more ahead!

In April, we celebrated our fifth year anniversary in Manhattan with many of our friends and put together this little celebratory video which I am happy to republish today.