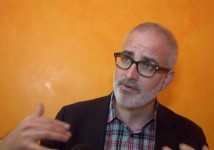 SAY Media, is building its own "vertical networks" of original content, including the fashion and pets categories, through the acquisition of Dogster and by building new content around fashion celebrity Jane Pratt.

We spoke with Matt Rosenberg, VP for Solutions, about content creation and monetization of that content via SAY's advertising network.

Rosenberg also discusses the results of a survey about the influence of independent bloggers and content creators.

Update: SAY Media announced this morning it has acquired the Sideshow Digital, a digital agency.