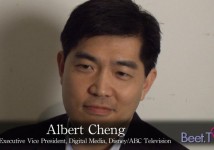 ABC is the only television network with an App for episodes for the iPad.  Since the launch, the App has been downloaded two million times and 28 million episodes have been streamed, says Albert Cheng, EVP for Digital Disney/ABC Television.

We spoke with him earlier this week about tablet consumption, “TV Everywhere” and the expanding opportunities for digital video.

Beet.TV interviewed him at the Elevate conference where he was a keynote speaker.