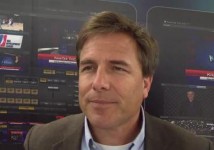 Revision3, the San Francisco-based programmer of lifestyle and technology video shows geared to 13-34 year-old males, is "the largest over-the-top" television network in the United States, says CEO Jim Louderback in this interview with Beet.TV.

He claims the network has 17 million monthly unique viewers who consume 70 million video views, citing internal numbers. He says the company is profitable.

We caught up with Louderback at Streaming Media East.

He told us that Revision3 will once again produce the live streaming of the Digitas NewFront conference in New York on June 9.  He says that this year, the show will be streamed live on YouTube.