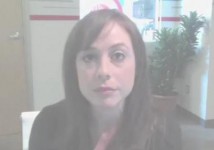 LOS ANGELES (via Skype Video) With a new studio in downtown Hollywood and a presenting sponsor in AT&T, CBSNews.com launched on Tuesday a weekly Webshow titled "What's Trending"with Shira Lazar.

The show covers political and cultural developments which are "trending" on social media.

For the past two years, Lazar has been doing live Web reporting and producing for CBS News around major entertainment and political events.

We spoke with her via Skype Video about the show, its distribution and how it works with its sponsor AT&T.

Here's more on show by Liz Shannon Miller at NewTeeVee.

Christian Muche co-founded DMEXCO, one the digital industry’s global tentpole events. He’s moved on.  Now, in partnership with the MMA Global, he is heading the most ambitious new marketing event of the year called “Possible.” The event will take place in Miami Beach at the Fountainebleau April17-19. A number of CMO’s will speak including the […]