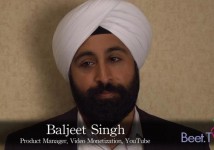 Half of premium video content will be consumed by connected deviices, via the Internet, by early 2014 says Akamai's Chief Media and Entertainment Strategist Chris Van Noy in this interview with Beet.TV

We spoke with Noy at the Beet.TV Digital Strategy Summit at Bloomberg on Thursday.   He was a panelist in session moderated by TechCrunch co-editor Erick Schonfeld.

The entire conference will be Webcast tomorrow, April 5 at noon EDT.