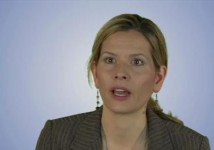 Aspera, a small, privately-funded start-up in Emeryville, California, has developed the means to transfer enormous video files at speeds far greater that FTP and other TCP-type protocols. Quietly, it has become the industry standard for the movie and on video industry to manage and send around big files.

Yesterday in our studios we spoke with Michelle Munson, president and co-founder.  She was in Manhattan for the GigaOM Structure conference where she was a speaker.

In the interview she told us that the company provides its services to most of the Hollywood studios, Amazon, Netflix, Hulu and many others.  She said the company has 1000 clients.

The company is not a CDN, it does not deliver files to the end user.  It is a client/server platform which enterprise users employ to move their big files.

The company also provides its platform to smaller publishers and journalists who can use the system on the desktop, Web, the iPhone and soon the Android.  We will be covering the "consumer" offering of Aspera in an upcoming segment.