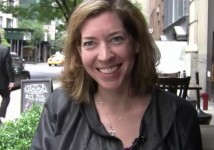 On a freezing Manhattan night in February, virtually all of the media industry’s top reporters, blogger and editors showed up for drinks with a newly arrived California woman who was unknown just a few months earlier.

Megan McCarthy is the editor of Mediagazer, a real-time aggregator of media news.  It was spun off from tech news aggregator Techmeme on March 8, 2010.

What drew staffers from the AP, Ad Age, the Financial Times, Forbes, the New York Post, the New York Times, Reuters, The Wall Street Journal, Wired, Yahoo! and the purple network to a packed bar in Times Square?  We think it is the growing influence of Mediagazer as the arbiter of the most important media news of the day.

Mediagazer reviews and indexes 1100 media news sources. Its top 100 most frequently posted sources are listed on a Leaderboard. (Beet.TV is at #15 today.)

Megan organizes the site constantly, along with her computer helper, an algorithm developed for Techmeme by Gabe Rivera.

In October, we interviewed Megan and have republished the interview today.

Here is a feature on Megan and Mediagazer in the American Journalism Review.

Below is a picture from Mediagazer media bar night.  Megan with the New York Post’s Keith Kelly.