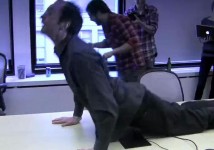 The New York offices of Next New Networks erupted in jubilation shortly after 4:00 p.m. on Monday when news was published of the the company’s acquisition by the YouTube.

After grabbing a bullhorn, COO Liam Collins announced that the staff are “now Google employees.” Then the party started.

With the music on, Liam  took to the conference table for an impromptu dance which we have covered here.  It was Liam’s last day as Next New Networks employee, today he joins Google.

Congrats to Liam and the Next New Networks team who will become part of YouTube today.

Co-founder  Tim Shey is joining Google, but not co-founder Fred Seibert.  Joining the team at YouTube is Lance Podell who had been Next New CEO until last year.