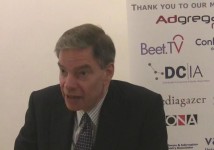 As it readies for the debut of the Keith Olbermann show, Current TV is building a studio in Manhattan, says co-founder Joel Hyatt in this interview with Beet.TV.

Hyatt says that the studio will have additional uses beyond the Olbermann show, which will debut in "late Spring."

The San Francisco-based cable network has its primary broadcast studio in Los Angeles.  Although Current maintains business operations in New York, this would be its first studio.

We caught up with Hyatt at the paidContent2011 conference in Manhattan for an overview of the role of Current as a news source and development of the company.

Congratulations to Staci, Ernie, Caroline and the entire paidContent staff for a superb program.  We were fortunate to cover and tape several interviews.