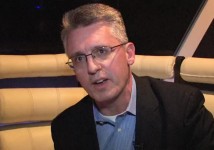 The newly expanded Dealbook section of The New York Times, is adding several video elements to its offering in an effort to capture the "character-driven drama" of Wall Street, says Mac William Bishop, Video Producer, in this interview with Beet.TV

In addition to traditional three-camera shoots and voiced news packages, Bishop is producing a series of Dealbook Portraits — interviews done in close-up without a correspondent seen.

In this segment, Bishop, a former video news producer with Reuters,  explains his approach to financial video news reporting.