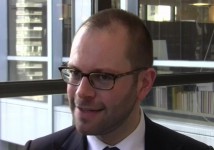 The Financial Times is enjoying a big rise in digital revenue, the publisher announced on Friday.   As much as 10 percent of new digital subscriptions are coming from iPad users alone, says Richard Edgar, Global Head of Video for the paper, in this video interview with Beet.TV

We spoke with Edgar in the New York bureau of the Financial Times on Friday.

Also in this interview, he says that the publisher is expanding its video operations with the opening of a television studio in London, recent hires of view producers in New York and plans to hire a video production staff in Hong Kong.

This is the first of two interviews with the FT’s head video editor.

For Magazines, a “Bitter Pill in iPad”

Update:  In the New York Times, Jeremy Peters writes that while many magazine publishers have embraced the iPad, the business model around subscriptions can be problematic.