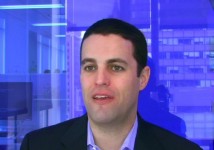 Bloomberg News is the only news organization to provide a free, live version of its linear television programming in the U.S. online. It will soon expand its live streaming via Apps on iOS devices, according to Kevin Krim, Global Head of Web Properties for Bloomberg News, in this interview with Beet.TV.

Krim says that Bloomberg is "not restricted in its business model" from streaming its programming. He explains that the company is not concerned about "offending" cable operators or other carriers who might find digital delivery as something which could be seen as "competitive."

Most broadcasters in the United States keep their live programming offline, restricting it to cable, telco and satellite where they derive substantial carriage fees.

CNBC provides live, linear programming on a subscription basis in the U.S.  While CNN, MSNBC and Fox News provide live streaming of special events online and on Apps, they don't stream their hosted programming.

In addition to streaming the live programming, Bloomberg Television producers edit 100 highlight segments per day from the linear show and publish them online.  Bloomberg is also creating documentaries, educational videos and other original content for the Web.

Much more about Bloomberg Television will be discussed at the Beet.TV Online Video Summit on February at the Washington Post, which will include Bloomberg TV international editor Moshe Oinounou as a panelist.

Keeping on the Cable Box

While Bloomberg is making ambitious moves into video streaming, it is being careful to keep its place on the cable dial and has lobbied hard around the terms of the Comcast/NBC merger deal, as Brian Stelter reports today in The New York Times.

This is the first of two interviews with Krim.  We interviewed him at Bloomberg headquarters in Manhattan last week.