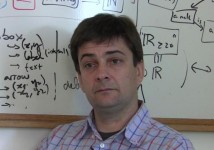 CAMBRIDGE, Mass — With its acquisition of ON2 and its video codec VP8,  Google is seeking to establish a unified, industry-wide codec for publishers to create HTML5 video.

Recently Beet.TV visited the offices of the W3C, the global, non-profit organization headed by Tim Berners-Lee, which sets standards for the Web.   The W3C is headquartered on the MIT campus in Cambridge, Massachusetts.

In a nuanced and decidedly diplomatic conversation, he said while a standard around one codec for HTML5 is not yet settled, he sees “potential” with WebM.

When asked about the performance of WebM vs. Ogg Theora, Le Hégaret cites community “sentiment” which finds that WebM has better performance in terms of “bandwidth and quality.”

The difference in performance is not surprising as Ogg is based on an earlier ON2 codec.

Also in the interview he speaks about evolving standards for surfacing metadata from videos.  He explains how standards around metadata and video will likely be standardized next year.