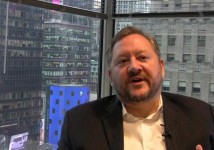 NEW YORK — The proliferation of smart wireless devices is creating a need for original content and MTV will be producing original entertainment for the emerging medium says Dermot McCormack, EVP for Digital at MTV Networks in this interview with Beet.TV

Heralded as new form of entertainment for mobile devices back in 2007, Mobisodes as an medium never had much traction.  With a slew of high powered smart phones and tablets, and faster connectivity, mobisodes may be back to stay.