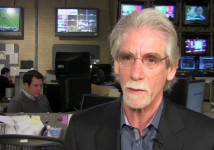 CBS News, long a major presence on television, has had a modest online presence, widely trailing industry online news giants MSNBC.com and CNN.com – as well the websites of ABC News, Fox News and the BBC.

But this appears to be changing as CBSNews.com has registered over 19 million unique visitors in November, besting ABC News, Fox News and the BBC in traffic in the United States, according to the latest numbers from comScore. See numbers below.

According to comScore, traffic to CBSNews.com has increased 29 percent since March.

Yesterday, we visited the CBS Broadcast Center in Manhattan to interview Dan Farber, editor-in-chief of CBSNews.com.

Farber, who has headed the site for the past two years, is a veteran technology editor who ran CNET News and, before that, ZDNet, explains how a wide-ranging strategy of social media, live streaming and syndication via YouTube has grown traffic.

He says that Twitter has been a powerful tool, with 1.6 million followers, along with Facebook. The site has also utilized a lot of video-sharing capabilities from its popular channel on YouTube and live streaming channels on Livestream and Ustream, as well as  extensive live programming on the company's proprietary player.

Farber says that traffic has doubled over the past year, up 36% in November alone.  (A company spokeswoman declined to provide internal numbers).

Yahoo remains the most popular general news site, followed by CNN.com, MSNBC.com,  AOL.com, then CBSNews.com, according to comScore. Disclosure: I've know Dan for about 15 years, beginning when he was an editor at ZDNet and later CNET, when Plesser Holland represented him. In recent years, Dan has become a valued mentor as I have developed Beet.TV