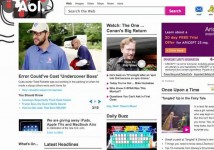 In a significant development for smaller Web video producers, who have had to rely largely on word of mouth to get their videos seen, clips are now being surfaced daily on the giant home page of AOL. The page  attracts 15 million visitors per day.

A daily series, called The One, produced by Next New Networks, debuts this week.  A daily, offbeat news update called AOL Daybreak, featuring Lindsay Campbell will launch later this month.

The home page videos are played in a pop-up window, a very sleak light box which features the videos as the surrounding page dims.

We caught up with Chris Grosso, GM of AOL Homepages, for this overview on the new video strategy around video at AOL.  He explains the mix of original video produced in-house and through partnerships.  He also explains about the opportunities to spread video beyond the homepages of AOL, notably through the newly acquired syndication partner 5Min.

More on the Next New Networks/AOL collaboration written by Liz Shannon Miller at NewTeeVee.

Grosso is former senior executive of NBC Universal who joined AOL in September.