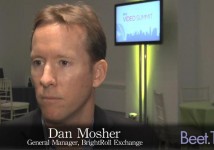 Based in London, Kantar is the big global market research unit of WPP.  Kantar Video is a new operation dedicated to video analytics.  It is headquartered in New York.

Earlier this month the company announced 17 leading video platforms and ad networks who would participate in the launch.   Some of the companies including Blip.tv, Brightcove, Ooyala, Adap.tv, and Tremor Media.

For an overview on the new service, we spoke with Jamison Tilsner, the company's evangelist. Jamison was previously COO of Tubefileter.

Here is the company's press release.

Production Note:  We shot this video at our new digs at studio of Next New Networks in Chelsea.

Disclosure: Jamison, who knows his way around the online video business,  will be contributing from time to time to Beet.TV with video reports and blog posts.  Next week, he will be covering Streaming Media West for us.  Delighted to have his help.  AP