News Video on Twitter to Expand as Brightcove Completes Implementation 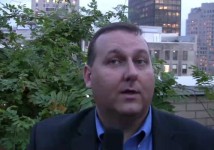 NEW YORK — With last month's launch of the new Twitter Web page, selected beta users have been able to embed videos from YouTube and Vimeo.

Now, Brightcove has been authorized by Twitter to have its videos embedded.

Last week, at an Akamai/Brightcove rooftop event, we spoke with Brightcove's SVP, Marketing Jeff Whatcott about the opportunities for publishers to share video on Twitter.  He explains that what shows up on Twitter is the publisher's custom, branded player with advertising.

Since Brightcove has many big publishers including the New York Times, The Guardian, Time, USA Today, The Financial Times and the Washington Post, we can expect much more news video to surface on Twitter.  Surely more video publishers will follow, including the cable networks.