HTML5 Video is Not Ready for the Web, W3C’s Le Hegaret 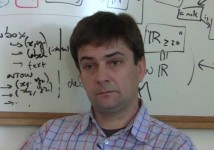 CAMBRIDGE, Mass — Despite the growing demand for HTML5, and its deployment by many big online players, its commercial introduction is premature as there is no standard for the new technology, says Philippe Le Hegaret, leader of effort at the World Wide Web Consortium (W3C) to establish standards for HTML and SVG.

This lack of standardization will create problems interoperability as publishers embrace different implementations.   Le Hegaret’s warnings about the early adoption of HTML5 was reported last week in Info World.

In an interview earlier last week in his office on the MIT campus, Le Hagaret told Beet.TV that a standard for HTML5 is a work in progress, being done in concert with many in technology companies.  By May 2011, he expects to to get final recommendations on standards.

While he says that some implementations work well, notably for mobile devices (we assume he is referring to Apple), the lack of standardization around HTML for devices is also a problem.

The issue is starting to make waves in the developer community, with engineers at Facebook pushing back on the W3C’ s caution about standardization, reported Stephen Shankland at CNET earlier this week.

In addition to the lack of standardization and its related issues, he addressed some issues about privacy and the problems created with HTML5 content downloaded to a desktop.  Some of these issues were raised by The New York Times this week.

This is the first of two interviews with Le Hegaret.