Google: “Currency” of Online Video Advertising Will Shift to “Cost Per View” as YouTube Readies “TrueViews” 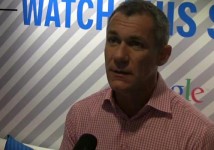 NEW YORK — The "currency" of online advertisnig will shift from the current CPM model of cost per impression, to a "cost-per-view" model in which advertisers only pay for the ads which are watched, says Google's Barry Salzman, head of media and platforms for the Americas in this interview with Beet.TV

That transition will begin when Google introduces its "viewer's choice" offering on YouTube later this year. The unit is called "TrueView."

The new offering provides visitors with a choice to click on one of three ad selections as a preferred pre-roll.  An image is below.

We spoke with Salzman after his keynote address on Tuesday in New York at the IAB MIXX conference.

This is the second of two interviews with Salzman. Our first, on the topic of rich media display ads, can be found here.