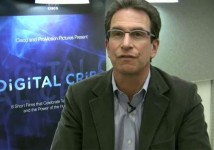 SAN JOSE, Calif – Cisco, which has a high-end video conferencing business called TelePresence, will announce in October a consumer product for as little as $500 per unit, according to a report out on Reuters.

This year,  Cisco bought and integrated a lower priced product line of video conferencing gear from Norway's Tandberg. The introduction of the new line is part of the Tandberg integration.

Earlier this year in San Jose, we spoke with Cisco's Ken Wirt on the rise of "visual networking" and the role of video conferencing techology.  We have republished this video today.