My Damn Channel Gets Venture Round of $4.4 Million 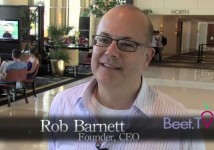 MyDamnChannel.com, the online video entertainment producer, has received a $4.4 million B round of venture funding, the company announced today.

The round is being lead by Intuitive Venture Capital.  The proceeds will allow the company to expand its staff and operations.

Daisy recently caught up with CEO Rob Barnett at the NAPTE LAfest and we have republished the interview today.

Here's a story in today's New York Times by Brian Stelter about the state of independent Web video programming.