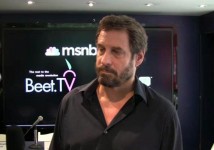 Machinima, the fast growing video site of video-game and virtual world videos, reached an audience of 27 million monthly uniques and 127 million video views in May, says Allen DeBevoise, chairman and CEO of the Los Angeles-based company.

The company’s primary advertising channel is YouTube, where it sells much of the advertising directly.

We spoke with last month with Allen at the Beet.TV Online Video Roundtable, where he was panelist.

Last month, the company raised $9 million in venture funding from Redpoint Ventures. He told me that the funds will allow development of other platforms for the company, notably for Android.