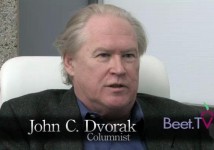 John C. Dvorak might like SmartPhones but he's not a fan of the iPhone. He doesn't like the AT&T tie-up and he said the new iPhone4 "just looks breakable." After all, who doesn't drop their phone once every few months?

He's not the only one who's concerned about the iPhone. Consumer Reports won't recommend it either.

By contrast, Google's NexusOne is sturdier and has held up well, Dvorak said. Dvorak is one of the foremost technology columnists around.

When I had the chance to be a guest on his weekly podcast Cranky Geeks, I jumped at the opportunity and snagged a few minutes to hear his latest thoughts on tablets, Smartphones and where we're headed next tech wise for Beet.TV.

More on his take on Apple, which could "sell ice cubes to Eskimos" is up on PC Magazine.