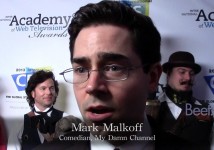 He pointed to Crackle's recently released show "Urban Wolf" that is rolling out episode by episode in the United States and via DVD in international markets. That's a model he expects will become the norm with digital projects for big studios like Sony, Paramount and Warner Brothers.

Branded entertainment is also a vital business model for Web shows and Tochterman has been involved in the popular Ikea-led Web show "Easy to Assemble." He discussed how to measure online success with us in this interview.

A new wave of content from Hollywood is explored in today's New York Times by Brooks Barnes.