Verizon Has No Plans for Apple Support in the “Immediate Future” 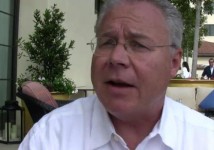 LOS ANGELES – Despite relentless speculation about the imminent support of the iPhone and iPad in the U.S., there is no plan for Verizon to support the Apple mobile devices in the "immediate future," John Johnson, a Verizon Wireless spokesperson told Beet.TV in this video interview.

The company is keen on the Android device and will introduce several new
models this year, including devices that have high quality video
recording capabilities with HDMI-like outputs.