VC Vinod Khosla on Gulf Oil Spill: “A Disaster is a Terrible Thing to Waste” 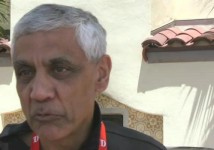 LOS ANGELES — Vinod Khosla, one of the world's most powerful venture capitalist, says in this video interview that the oil spill in the Gulf will spur innovation in clean energy development.

While a majority of investments of Khosla Ventures are in clean tech, it invests in several Internet start-ups including Hunch, YuMe, and Slide.

I interviewed Khosla yesterday at the Wall Street Journal's All Things Digital conference.