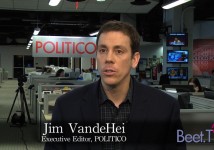 Palo Alto-based company PLYmedia could be poised to have a big impact in the space.

In addition to the opportunity created by companies seeking to reach audiences around the world, in the United States, captions on Web programming could be greatly expanded by the passage of legislation before the U.S. Congress; Brian Stelter reports in today's New York Times.

Unlike the Google translation technology that has been recently integrated in YouTube, PLYmedia creates captions in real time with a network of human translators.

The company claims its captions are nearly 99 percent accurate.

From a human-generated caption, the company has an automatic translation service, which is not as accurate.  The company is integrated with several video platform companies, including Brightcove, Ooyala, Kaltura, Kit Digital and Livestream.

PLYmedia will be providing captioning for our Beet.TV Online Video Roundtable on 6/22 with live translations into Mandarin, Japanese, French, Spanish, and Hebrew. PLYmedia is integrated with Livestream, which is carrying the Webcast.

On Friday, we interviewed Matt Knopf, VP of Business Development for PLYmedia, in his Palo Alto office. We conducted the interview via Skype video.