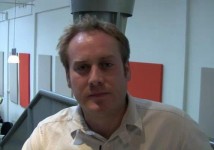 NextNewNetworks, the New York-based producer and distributor of entertainment Web video, is going to greatly expand its offerings by creating a platform for hundreds of independent video producers.

For an overview of the new plan, we spoke with company CEO Lance Podell.  We caught up with him last week at the Digitas Digital Content NewFront event.

The news about the expanded network was released earlier this month.  Here's an overview by Ryan Lawler of NewTeeVee.

Yesterday, NextNewNetworks announced it will distribute content to EPIX, the HD movie and entertainment service.