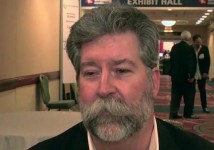 While the issues surrounding playing video on a Web browser are "solved," the technology curve around video delivery is increasing and accelerating with the introduction of several mobile platforms and connected TV's.

These are the comments of Bob Mason, Chief Technology Officer and co-founder of Brightcove, the big online video services company.  I spoke with him on Tuesday at the Beet.TV Online Video Roundtable in New York where he was a panelist.

He spoke about the value of mobile video Apps for Brightcove customers, including the Financial Times.

As many publishers rush to publish video in HTML5, mostly so their videos can be watched on Apple devices, there is still no standardization around the format, and this is creating problems, as Stephen Shankland at CNET News.com reports today.