Crowd-Sourced Journalism at The Washington Post: “The Community Knows More than We Do” 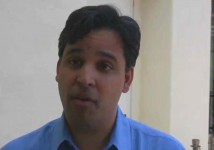 LOS ANGELES — Crowd-sourced journalism at the Washington Post, which has taken a Wiki form around amateur sports and Washington politics, will expand into several verticals, with community members increasing their presence on the newspaper's site, says Vijay Ravindran, Chief Digital Officer.

I spoke with him on Wednesday at the Wall Street Journal's All ThingsDigital conference.

He says that in many instances, "the community knows more that we do," particularly around government and politics.