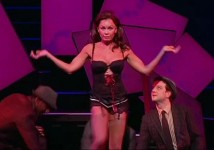 One of the most exciting uses of video as performance art can be seen in the current Broadway production of Sondheim on Sondheim.

The show is a mix of documentary video footage of theater legend Stephen Sondheim, 80, shown on moving video monitors interspersed with performances of a live cast.

We spoke with video artist Peter Flaherty who created the documentary footage and conceptualized the integration of the video along with the stage director and longtime Sondheim collaborator James Lapine.

Peter says that unlike shows with video projections, the use of moving screens has been done to create more of a  "web video" experience for theater goers.

The show has gotten favorable reviews, but none seem to focus on the originality of the video integration.  I saw the show and it is spectacular.  It is running until June 27.

In this video, we have integrated several clips from the show.