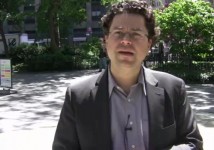 While both have published some original clips, mostly with staffers using Flip cameras, they are readying sophisticated studio facilities and are using top-shelf video management services:  TechCrunch is using Brightcove, while GigaOM is using Ooyala.

Last week we spoke with TechCrunch's co-editor Erick Schonfeld about the upcoming launch of TechCrunch TV (TCTV).  We have published the brief video here.

The 24-hour video operation will be managed by TC writer Paul Carr. The launch date has not been disclosed.

TCTV will include original content coming from the new studio in TC's Palo Alto offices.

Meanwhile in San Francisco, former NewTeeVee editor Chris Albrecht is readying a launch of GigaOM TV.  The blog network has created a sophisticated 3-camera studio.  Unlike TCTV, GigaOM won't be a continuous network.  Albrecht declined to share many more specifics as the operation is still in development.

Other tech/media blogs have been increasing video content, notably Henry Blodget's Business Insider, which also uses Ooyala, and the crew at AllThingsD, who use the Dow Jones video platform.

Here is a piece from TechCrunch Hackathon, taking place this weekend in New York in advance of the TechCrunch Disrupt conference.  Evelyn Rusli shot this in her Flip camera and edited the piece.

Below is a recent video from GigaOM TV–segment with angel investor Naval Ravikant.