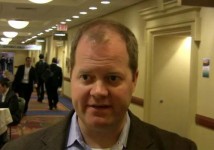 Roku, the little black box that connects the Internet to television sets, has sold over 500,000 units, and its owners use it over two hours a sitting, Roku spokesman Brian Jaquet told Beet.TV in this video interview.

Today, the company announced it has added the UFC network to its menu of sports and entertainment programming.

One big development on the horizon is a Netflix menu for Roku users.  As of now, Netflix users need to create their video queue on a computer, which is then displayed on the Roku-connected television.  Beginning in June, subscribers can select their choices on the television set.

We caught up with Brian at the Streaming Media East Conference last week in New York.