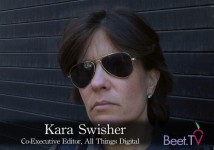 Over 25 years ago, a incensed Georgetown undergraduate “railed” on the phone about the sloppy coverage of her college to Assistant Managing Editor Larry Kramer, the paper’s metro editor.

She told Kramer that the paper was staffed with “idiots” it had to get its act together. Kramer invited her to the newsroom to meet. She was soon hired as the paper’s Georgetown stringer, Kramer recalls in this video interview.

Kramer went on to the San Francisco Examiner as executive editor and later founded Marketwatch, which he sold to CBS. He is now consulting and teaching journalism at the Newhouse School at Syracuse University.

I caught up with him on the street, a few blocks from the Beet.TV studios on East 22nd Street.

Beet.TV is heading to LA on June 1 to attend and cover All Things Digital. Kara and Walt have put together a blockbuster speaker line-up. Can’t wait.

Below is an interview I did with Kara about two years ago.