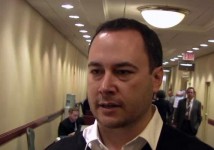 The site indexes both individuals who appear in video and those who are referenced in the metadata. The listing includes writers, the director, and others who are credited. We think its an interesting approach to video discover.

Yesterday I spoke with Jim Lanzone, CEO of the Los Angeles-based Clicker at the Streaming Media East conference.  Jim was on a panel I moderated on video search.

Earlier this month, the company announced the functionality to index live programming.

We did this interview after the panel.  In the clip, we have several examples of how this works.

Relieved to find I'm indexed, as well as Daisy Whitney, in the 75K!

The company, which had been in stealth mode until late last year, has raised $21 million in venture funding. from top-tier VC's including Benchmark and Redpoint.