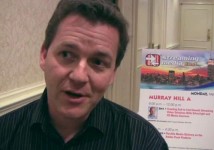 With the imminent launch of Flash Player 10.1, Adobe will provide publishers with tools to dramatically reduce bandwidth costs with a new peer-to-peer system, explains Kevin Towes, Product Manager of Adobe Flash Media Server, in this exclusive interview with Beet.TV.

The new player includes a P2P program that will allow users to share streaming video (both live and on demand) with others.

Adobe provides a centralized management system called Stratus, for which it is paid by publishers, but the big software company does not host or stream these files.

Towes says the system will eliminate bandwidth costs in some cases, citing specific projections in this interview.

He says that the system will both be a profit center for Adobe, as well as means to deepen the value of Flash in the industry.

The P2P protocol will be suitable for much Flash video and Flash-powered video games, but not for high quality, broadcast quality video since P2P on the public Internet has limited capacity, he told me off camera.

The most recent version of the Flash Player, 10.0, had limited utility, allowing a small number of peers to connect.  The new player will be far more robust, he says.

I spoke with Towes at the Streaming Media East conference in New York last week.

Update:  Here's an overview of this development by Ernesto on TorrentFreak.