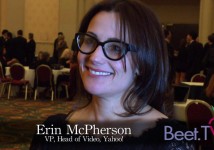 Blinkx, the London/San Francisco-based video search engine and destination site had a jump of 204 percent in video views in the U.K. over the past 12 months, just behind the torrid 205 percent increase of video views on Facebook, just announced by ComScore.

While both have grown to 43 million views per month for Facebook and 29 million for Blinkx, they are far behind YouTube, which had nearly 2.4 billion views but up at a slower rate of 17 percent for the year.

Last week, we sat down with Blinkx CEO and founder Suranga Chandratillake for an update on the company.

Citing analyst predictions, Suranga says the company is expected report sales for 2009 at around $30 million.  The publicly-traded company will issue earnings next month.

Update: Blinkx has a new tool for behavioral ad targeting.  Ryan Lawler has the story on NewTeeVee and here is the story on TechCrunch by Erick Schonfeld.