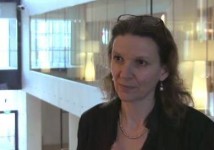 LONDON — Video news reporting for the Web, different than conventional television news, is quickly evolving and the BBC is innovating in a variety of forms including one which the newsroom calls a "show and tell."

Recently in London, I spoke with Mary Hockaday, Head of the BBC Newsroom, about video news reporting for the Web.

She refers to an emerging format for correspondents on the ground to act as a sort of guide, providing an unscripted, personalized tour of the circumstances of a news story.

This form was dramatically on display in yesterday's report from BBC correspondent Rayhan Demytrie: a dispatch from the main square in Bishkek, Kyrgyzstan, site of the violent anti-government demonstrations.

About the circumstances of the historic report, Hockaday told me via email this morning:

"She is our BBC reporter there, so multimedia, she files regularly for the BBC Kyrgyz service but also for all our outlets when there is a news story of interest to wider audiences, as now.  It's a reflection of the BBC's commitment to foreign newsgathering that we have someone on the ground in places like Kyrgyzstan able to provide immediate, informed reportage and analysis."

The New York Times has assembled a report of video dispatches of yesterday's violent unrest from the BBC, YouTube, Reuters, the AP, and other sources.

I interviewed her at the offices of the Guardian newspaper, which hosted our Beet.TV event on March 8.