The Guardian Finds Video Success with the Contextualization of Content 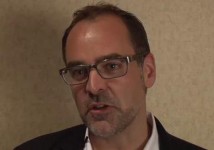 LONDON — The Guardian newspaper has been innovating with online video since 2006, has invested heavily in video operations in its new headquarters, and is finding traction with its own brand of journalistic video.

These are comments by Stephen Dunn, head of technology strategy at the newspaper, in this interview.

Dunn notes that while video reside in a video section, the paper is finding success with videos embedded across the site, in the context of news stories.

He says that ad sales around online video have been strong, with ad impressions constantly "sold out."

The Guardian hosted the Beet.TV Online Video Roundtable on March 8.

Diclaimer:  Brightcove sponsored the Beet event at the Guardian.