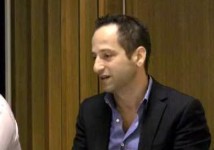 LONDON — Reuters, which produces and distributes news videos to many of the world's broadcasters and top news sites, is working on a plan to syndicate videos from third-party content producers, said Greg Breitchman, Global News Editor of Reuters, at Beet.TV's online video summit.

He explains that the growing demand for video news, often in raw form, is creating a big marketplace for content. He says that the new program will be in place later this year.

Also in this interview about syndication, Brightcove's Jeff Whatcott explains the opportunities for content video producers.  Caroline Casey, director of digital development at Turner in Europe, says how  embeddable players have been essential in creating views for the network's entertainment fare.

Last month, Brightcove announced that Turner is using its platform.

BIG THANKS:  To the event's sponsor Brightcove and to the Guardian for hosting us.