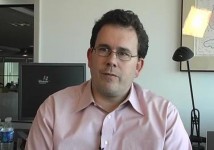 LONDON — While the Financial Times is mostly behind a subscription wall, its videos are provided without restrictions.

While FT advertising sponsorship is doing well, the publisher is considering charging for some video content, Stephen Pinches, Lead Product Development Manager at FT.com told the Beet.TV Online Video Roundtable.  The Roundtable was held at the offices of the Guardian in London yesterday.

In this segment, Pinches responds to questions from my co-moderator Robert Andrews, editor of paidContentUK.  Here's Robert's report.

Journalism.uk, reports that the FT has decided to use Brightcove as its online video video service provider.  More on FT's move to Brightcove from NewTeeVee.  A Brightcove spokesperson has declined to comment on the FT win.

Disclaimer:  Brightcove was the sponsor of our London event.