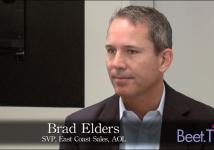 LONDON –  The BBC has found a growing audience for online news in the U.K., with some 5 million unique visitors watching 28 million videos in January, up 25 percent over the previous four months, according to the latest numbers from comScore.

Why do visitors watch videos on the BBC and what are the compelling elements which drive consumption?  These are among the subjects explored in several interviews with the BBC editors conducted by Beet.TV in London earlier this month.

Our first segment is with Mark Barlex, the On Demand Editor for BBC News.  We conducted this interview in the BBC newsroom at Television Centre in West London.

While the BBC is finding traction with viewers , the development of online video news is still in the very early stages, Barlex explains.

Today's second bombing in Dagestan was captured on what appears to be a low res camera or camera phone and uploaded to the BBC.

Thanks to the Beeb

More to come from Mark and Mary Hockaday, Head of the BBC Newsroom.

Thanks to Mark and Mary and the BBC communications team for helping us with this series.