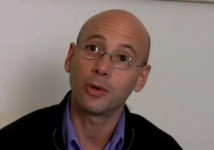 RealPlayer SP is a desktop application that allows users to save streaming, online video files, including YouTube videos,  to a local drive to watch and then move to connected mobile devices and Facebook.

Not all video can be saved with the program, notably premium entertainment and sports programming.  The company says that 70 million applications have been downloaded to date.

The program also allows users to edit and share original video they have made.

Today, RealNetworks announced a new addition to the service: the ability to trim and do some basic editing around the downloaded clips.   Jeff Chasen on RealNetworks visited us recently for the demo and explanation.