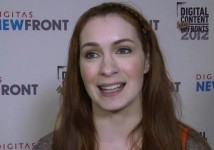 NBA Digital reports that it had 4.95 million video streams of the All-Star game on Sunday, February 15, with a total of 17 million views, which is 20% more than last year.  Andy met up earlier this month with Bryan Perez, Senior VP & GM of NBA Digital to discuss the developments in the NBA's online and mobile viewing platforms.

Perez told Andy that NBA League Pass, the out of market subscription to all NBA games on TV or Broadband, has expanded to mobile and is available on the iPhone or Android.  The launch of this has been increasingly successful–during All-Star, mobile viewers increased by 146%.

Perez says that mobile has expanded the NBA market toward a younger demographic.  Additionally, the interactivity of digital programming is similar to attending a sports game since there is interaction and communal energy.  For example, the live online series The Jump is includes a moderator who syncs with Twitter and Facebook during the show.  As app models develop on television, interactivity will spread across all the platforms.